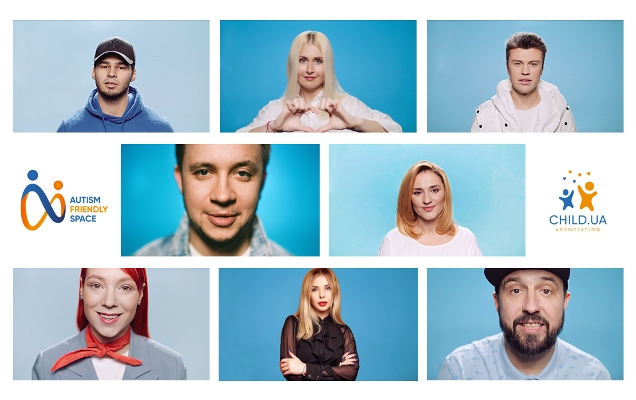 On April 2, the World Autism Awareness Day, the thematic marathon AUTISM FRIENDLY SPACE (AFS) started, it was initiated by the CHILD.UA Association headed by Eugenia Tymoshenko.

Goal of the marathon is to change the attitude of society towards people with autism. Creating an autistic-friendly environment in Ukraine is one of the main objectives of the AUTISM FRIENDLY SPACE (AFS) marathon. At the Oscar cinema, in the Smart Plaza the first special film show for people with autism has already taken place, during this film show sound and light effects were muffled, because people with autism are extremely sensitive to loud sounds and bright light. In the future, such film show in Oscar will be held once a month.

“We plan to radically change the situation in Ukraine. Now we are implementing a large-scale educational and information campaign in the community. We are building links with cinemas, supermarkets, shopping and entertainment centers. We invite employees of such institutions to undergo our trainings – so that they are ready to react tolerantly and help people with autism. We will try to create as many leisure places as possible friendly to people with autism, namely: less loudness of sound, less bright light, soundproofing lounges and special film shows” – said Eugenia Tymoshenko, President and Founder of the Association.

The premiere of the video will be held on April 2, World Autism Awareness Day, in the Oscar cinema and will be broadcast before the film sessions. The show of a social video with the participation of Ukrainian artists is just one of many events within the AUTISM FRIENDLY SPACE.

In order to draw public attention to the problem of people with autism, a thematic photo exhibition “Open your heart for friendship” was also organized. Fifty children took part in the photo shoot, 25 of them with autism, as well as Tatyana Piskareva children’s stars factory.

The photo exhibition will begin on April 2 at 10:00 in the Smart Plaza shopping mall, and will continue its work in the KMDA exhibition hall.

A kind of “music therapy” session from composer and pianist Evgeny Khmara will also become a part of the AFS marathon in the on-show gift for people with autism. April 5 at 18:00, in the Column Hall of the KSCA a charity concert “Healing Music” will be held, accompanied by the “Black Tie” quartet.

“My concerts and music therapy sessions are what special children love so much. Of course, besides music therapy and other types of rehabilitation, such people, and especially children, need space and special conditions adapted to their needs in order to feel free in society. Initiative AFS, initiated by the Child.ua Association, is a significant contribution to building a culture of tolerance and respect for people with autism in Ukraine” – says Evgeny Khmara, a musician and member of the Board of Trustees of the CHILD.UA Association.